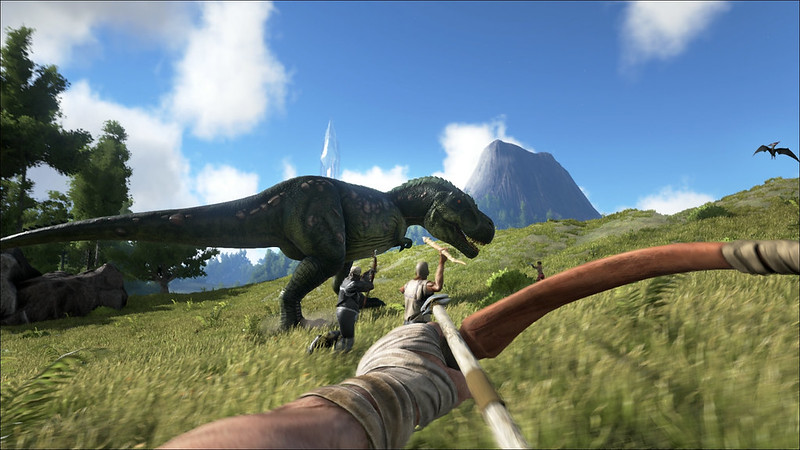 Our Review of Ark Survival Evolved:

Ark: Survival Evolved was released all the way back in 2017. The game is MMO-like allowing up to 70 players to inhabit a server all at one time. The game also offers a variety of modes between PvP, PvE, and single-player. Over the years I’ve clocked in hundreds of hours in the immersive world of Ark, but an overwhelming amount of game-breaking bugs, a toxic player base, pervasive cheaters, and lackluster developers prevent the game from being as great as it promises.

There are quite a few survival games on the market, but the main draw of Ark is the dinosaurs. Almost every creature you come across in the game, the player is allowed to tame. Even more exciting than that, most of the creatures you will encounter are rideable with very unique sets of abilities, and they fulfill unique niches of usefulness in the game. Some of the dinosaurs, such as the ankylosaurus are great for harvesting resources such as flint, metal, stone, berries, and thatch. Others, like the giganotosaurus offer high DPS and are critical in PvP fights or for harvesting meat for animals you are raising. With DLC, Studio Wildcard added traditional fantasy creatures like griffins and wyverns, as well as creating their own unique fantasy creatures like the managarmr (an ice-breathing wolf-like creature that can blast itself through the sky).

Ark also offers a unique and intricate breeding system that allows players to breed for mutations. Mutations alter the colors of the dinosaurs you raise,  but, more importantly, the player can get random stat mutations on the dinosaurs, thus allowing the player to constantly upgrade their own tames in hopes of gaining an edge over their opponents. Players can store the creatures they accumulate in cryopods, which, essentially work as this game’s Pokeball. Despite the fun of taming, breeding, and raising over 100 different dinosaur species, it is incredibly time-consuming. On official servers, a tame, depending on the specific dinosaur, will range from 10 minutes or so, to over an hour. If that sounds like an unbearably long time, breeding and raising are much worse. The quickest of creatures to raise will take around 8 hours, and the longer ones, such as the giganotosaurus, will usually take at least a week to raise. If the player chooses to imprint his or her tames (a system in which the player must “bond” with the baby they’re raising at intervals in order to raise the creature’s stats), the player is looking to spend much longer raising any given creature. I myself have spent roughly 2 weeks before raising certain creatures. In PvP, this makes the death, or robbery of any creature, sting much, much more. However, in turn, it makes the thrill of receiving loads of cryopods out of a successful raid that much more rewarding and satisfying.

Homesteading is the majority of what any player will be doing in Ark, regardless of if it’s PvP or PvE. Grinding metal, stone, wood, flint, thatch, and over a dozen other resources is a task that will take much of the player’s time. In PvE, this is generally in order to build larger and better structures, much like how one would harvest cobblestone and wood in Minecraft, and can be done so at a leisurely pace. PvP, though, is much more demanding. In order to keep up with the other tribes on the server, the player is practically required to invest hours into grinding, often on a daily basis. Guns, turrets, swords, saddles, armor, C4, etc. All of these require lots and lots of resources that are constantly being consumed either attacking enemy tribes or defending one’s own base from potential looters. This means that if the player wants to stand any chance in the realm of PvP, they have to invest a lot of time into grinding resources in order to preserve whatever items they have. Sometimes it can be fun to mindlessly grind away at various resources, but, often times, it can be a grueling and aggravating experience. Very often the player will want to do something else, but their turrets are running low on ammo. This leaves the player with basically two options: Let the turrets run out of ammo and run the risk of being raided and losing all your stuff, or get on the ankylosaurus and begin the process of grinding gunpowder to make more bullets. Couple this with Ark’s prevalent bugs and poor framerate, grinding is often a dreadful experience.

Ark’s system of items is unique in that it offers blueprints of varying degrees of statistical advantages. Blueprints range from the lowest tier, ramshackle, to the highest tier, ascendant. Players use these blueprints to craft the in-game items like weapons, armor, and saddles for their dinosaurs. For weapons, players will be looking for blueprints with high durability and damage. For armor and saddles, players should be on the lookout for blueprints with high armor. Players obtain blueprints from loot crate drops that randomly spawn on the map, defeating mini-bosses, or by taking them in raids from other players. Because the stats and resources required for any given item found on a blueprint are random, players will constantly be on the hunt for new and better ones regardless of how far into the game they are. This along with the immersive breeding system and base building make Ark practically a never-ending game with something to always do.

PvP is by far the most immersive mode in Ark, but it’s also the most demanding. I’ve had some of the best experiences in all of gaming in Ark PvP. Whether you’re raiding an enemy tribe, defending your own base, or just out and about in combat, PvP is engaging and thrilling. Because Ark is based so heavily on grinding, and because it takes so long to achieve things, defending and raiding are both incredibly exciting. However, though fun and exhilarating, Ark’s PvP is incredibly time-consuming and can quickly go from being a fun experience to a stressful one. Raiding a large tribe will often take days of non-stop action. Defending, if your tribe is the target of one of the large Alpha tribes, is even worse. I myself once spent two weeks fighting off one of the largest tribes on PvP, and when it was over, though we won, it was hardly worth it because most of our stuff was destroyed.

Despite the engaging gameplay of Ark, a lot, if not most, of the fun is ruined by bugs. Over the years I’ve played hundreds of games, and I’ve never encountered one as buggy as Ark. Framerate dips and game crashes are to be expected frequently. Players can expect to crash very often, several times per day. Game freezes are even more common and can sometimes freeze multiple times in just a few minutes. Framerate and crashing issues can be somewhat alleviated depending upon which hardware you choose to play the game on, with more powerful PCs or consoles like the Xbox Series X being able to handle the game much better. But on more basic hardware like a PS4, players can expect to frequently experience crashes and frame freezes.

If you can suffer through the game crashes and poor framerate, Ark still offers an abundance of other game-breaking bugs and cheats. Duplication glitches are absolutely rampant in Ark, with players duplicating their dinosaurs and items by the hundreds. If that’s not enough, many players will “mesh” enemy bases, meaning that they will glitch under the map where they can’t be killed by enemy defenses and can destroy enemy bases with no resistance. Crossplay or PC servers are often overrun by cheaters as well, with many PC players using aimbots and ESP (a cheat that allows someone to see enemy players and bases wherever they are on the map). Studio Wildcard, the Ark devs, practically ignore these issues and rarely ban players for cheating or using glitches to their advantage.

PvE doesn’t have many of the issues PvP does as threatening glitches/cheats don’t really matter. However, players will be hard-pressed to find a PvE server they can even build on. In PvE, players aren’t allowed to build near structures of other players. The result is that almost all PvE servers are spammed with structures from tribes that have been there for a long time. Usually, this means 2 or 3 tribes will have the entire map spammed, completely disabling newcomers to build anywhere.

Single-player also hosts its own plethora of game-breaking bugs. All of the above bugs apply to single-player, but there’s also a unique glitch in single-player where resources wont respawn. This means after several days playtime, most world’s are barren of resources and the player cannot progress any further.

Despite the prevalent bugs and glitches in Ark, it can still be a fun experience especially on unofficial servers, which are player-run servers that are generally much more managed than official servers. Though cheaters still often inhabit these servers, the admins are usually much more engaged with their players than Studio Wildcard is and will ban/discipline them.

Morality: When creatures or players are attacked, they will spout large amounts of blood, but that’s about it. The game contains very little sexualization, with the only potential problematic element being that players spawn in their underwear.

Some Alcohol Use: The game also contains mild usages of substances such as beer and, on one map, players can stumble into a mushroom patch which will make the player see rainbows and gradually lose health.

Toxicity and Morality of Online Atmosphere: The most concerning aspect of Ark is that it’s almost entirely online based, meaning players will see and hear a plethora of sexual comments, racism, and profanities from other players. Fortunately, Ark allows players to turn off the global chat feature which eliminates most of these concerns.

Ark can be described as having very high highs, and incredibly low lows. When the game is at it’s best, it’s one of the most fun experience a player can get from gaming. Unfortunately, though, most of the game is spent mindlessly grinding and being frustrated by prevalent bugs that have yet to be addressed in 4 years it’s been out. On top of all that, the game is extremely demanding and requires a serious time commitment. All of this makes for a game that can be very fun, but is brought down by many issues that it would be unplayable for most players that I can’t recommend for most players. The only way I could recommend this game is if you have a great deal of patience and are willing to deal with the bugs, long learning curve, and avoid the cheater ravaged official servers. Ultimately, the game is fun, but players will often find themselves asking “is this game worth the frustration?”

Link's Awakening was originally released all the way back in 1993 on the GameBoy. It…